It’s no secret that trend lines are an important facet of Point and Figure charting, key to evaluating long-term chart trends. However, while much has been written on how to draw and interpret these lines, much less has been said regarding the rationale behind the rigid fashion in which they’re drawn.

I’m going to pay some service to that issue below. First though, let’s review the basics of P&F trend line creation.

Whereas trend lines on bar and line charts are drawn subjectively, at the discretion of the chartist, traditional Point and Figure trend lines are drawn in an objective fashion, using simple but strict rules. Bullish support lines are always drawn at rising 45° angles off of significant chart lows, and bearish resistance lines are always drawn at falling 45° angles off of significant chart highs.

While some subjectivity may apply to identifying “significant” chart highs and lows, long-term support lines always originate below the column immediately preceding the first bullish pattern formed below prior bullish support: 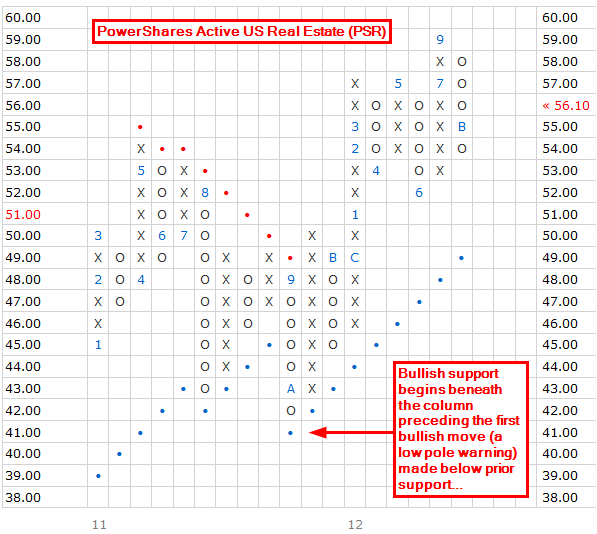 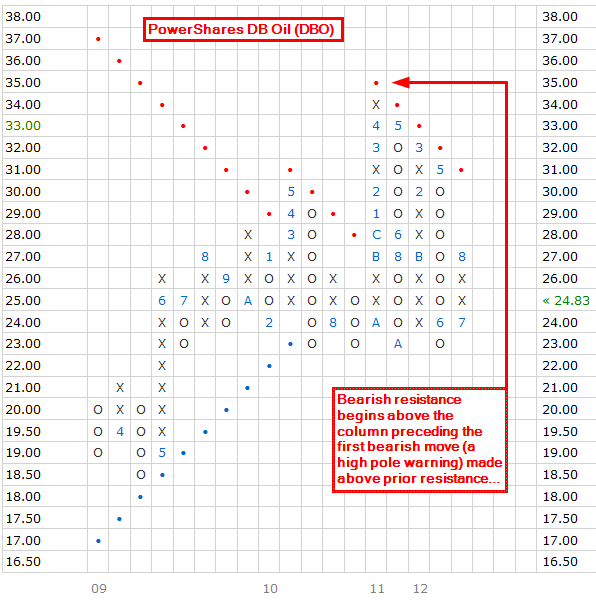 So far so good. Pretty simple stuff in principle really. But have you ever wondered why Point and Figure chartists are so intent on drawing these lines at fixed 45° angles, given the inherent inflexibility of that approach? If so, then consider the following.

Unlike bar and line charts, Point and Figure charts are drawn on squared grids that are (by virtue of being squared) proportionally equal in both width and height. This means that, in order to maintain a rising 45° trend line, a P&F chart must continue to form more squares up than sideways, as SPY did from April 2003 through October 2006: 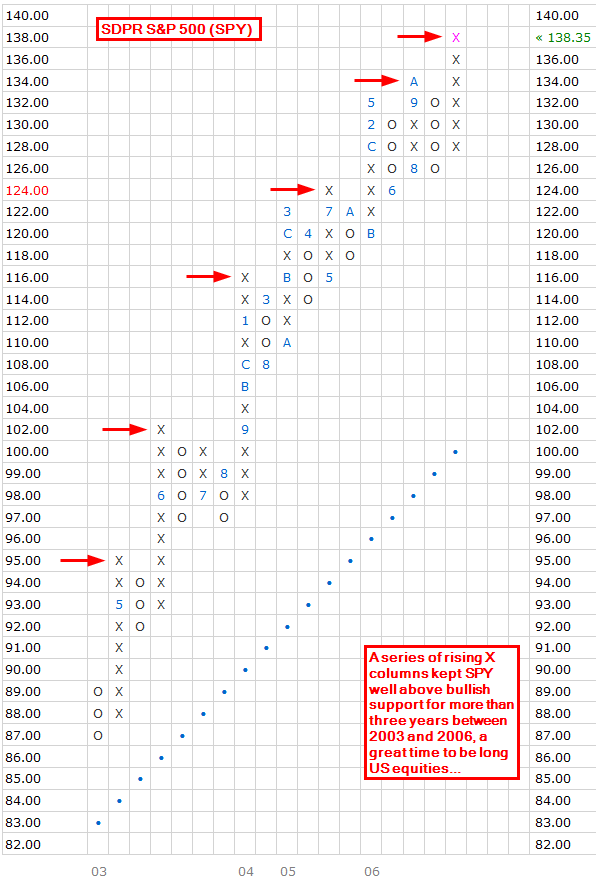 Conversely, to maintain a falling 45° trend line, a chart must form more squares down than sideways, as SPY would later do from the end of 2008 through the beginning of 2009: 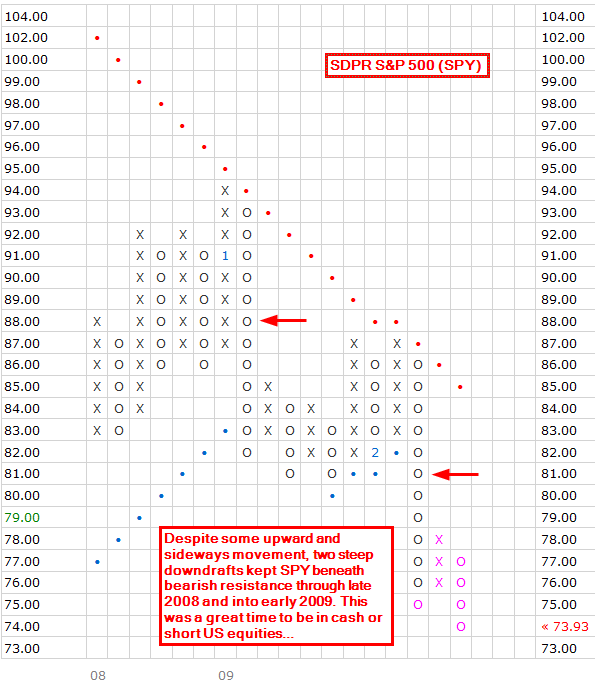 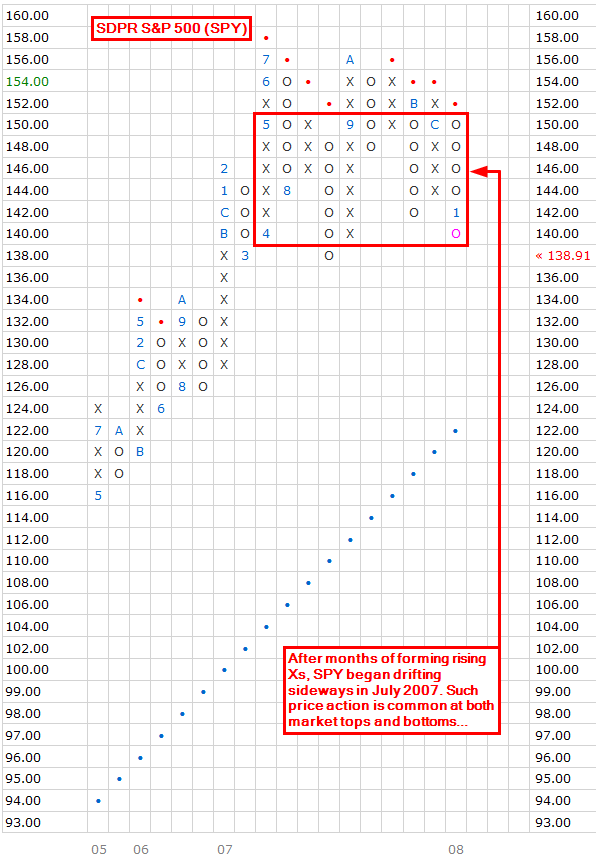 There are two key things to bear in mind here: one, such sideways patterns frequently surface at both market tops and market bottoms; two, when left unchecked, they eventually lead to 45° trend line violations. Why are these points key? Because, taken together, they imply that 45° trend line violations can provide advanced warning of important long-term trend reversals. That is precisely why Point and Figure chartists insist on drawing them, and why they pay them such heed!

After drifting sideways and lower for roughly eight months, the chart above ultimately penetrated long-term bullish support in March of 2008, six months before the collapse of Lehman Brothers and the brutal bear market that ensued. 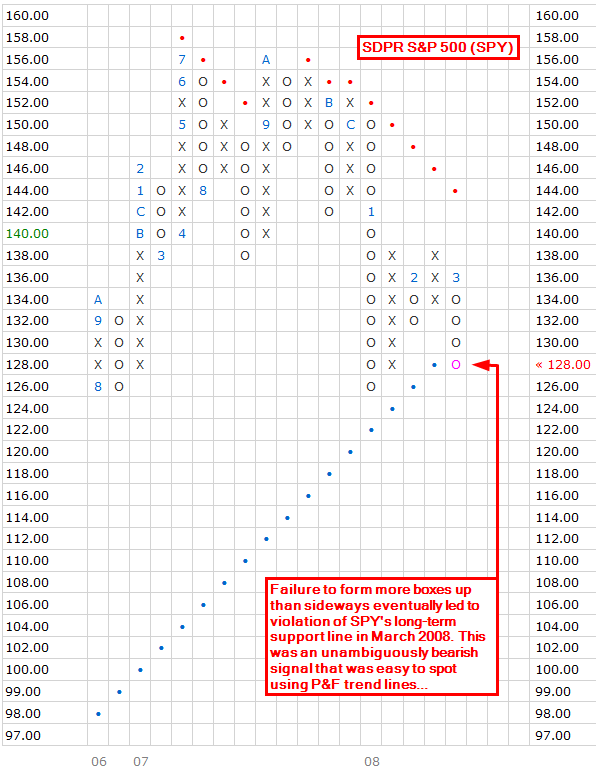 Soon after that support line violation, the chart entered a powerful downtrend that lasted nearly six months. Penetration of bearish resistance in late March of 2009 signalled the end of the downtrend and the beginning of a lengthy move up that is technically still in tact today (at the time of this writing): 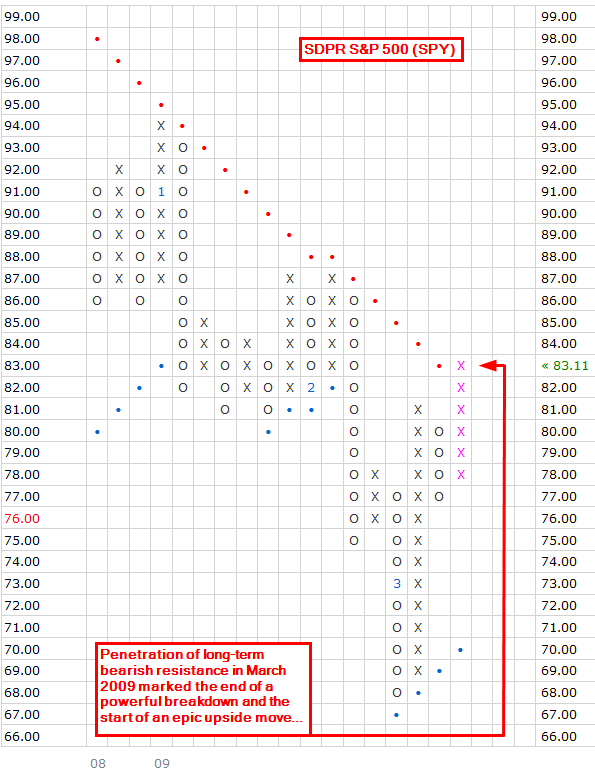 So then, let’s review. We’ve seen that Point and Figure trend lines are easy to draw and interpret. But that much has been noted many times before.

The more subtle issue that we’ve examined is the rationale behind the rigid fashion in which these trend lines are drawn. To recap, due to the proportional nature of P&F charts, the manner in which chart squares form, and the implications and consequences of protracted sideways square formations, 45° trend lines are extremely adept at both verifying the direction of long-term trends and signaling important trend reversals.

Remember, a primary rule of investing is to trade with the trend. To do that successfully, however, you need to distinguish bull trends from bear trends and recognize when trends are ending. Traditional 45° P&F trend lines are very well suited to both of those tasks, and are thus rigorously utilized and highly valued by Point and Figure chartists.