Given those rules, and the inherently “square” nature of Point and Figure charting, it stands to reason that 45° trend lines should be drawn on straight trajectories until they are violated by price. This, however, is not the case. Due to a frequently overlooked but very important rule pertaining to those lines, they may on occasion shift trajectories.

In this brief article, I’ll explain that rule and provide several real-world charts that demonstrate its usage.

Newcomers to P&F charting often assume that when price touches a 45° trend line the line is violated. This is incorrect. As veteran P&F chartist Tom Dorsey states in his famous book on the subject,

“…to qualify as a violation of the trend line, [price] must move through it by one box or more, not just touch it. There is no such thing as the line being a little violated. It is or it isn’t.”

In other words, as far as 45° trend lines are concerned, almost doesn’t count. Price may test a trend line by advancing or declining to it, but may only invalidate a line by moving at least one box beyond it.

Considering this, and the fact that Point and Figure squares may only be occupied by a single X, a single O, or by a trend line, how do chartists represent both price and trend line when the two intersect?

The simple (and often surprising) answer to that question is, they move the line. Let’s look at some examples.

The chart below shows that PowerShares DB Silver (DBS) touched its bearish resistance line twice toward the end of 2012 but on both occasions failed to rise above it. The line was therefore never violated. However, to represent the fact that it was tested, it was in both instances shifted up one box (see red arrows), creating adjusted downward trajectories.

In similar fashion, DBS twice touched its bullish support line in early 2013 before dipping below it. On both occasions, the line was shifted down one box down, creating adjusted upward trajectories. 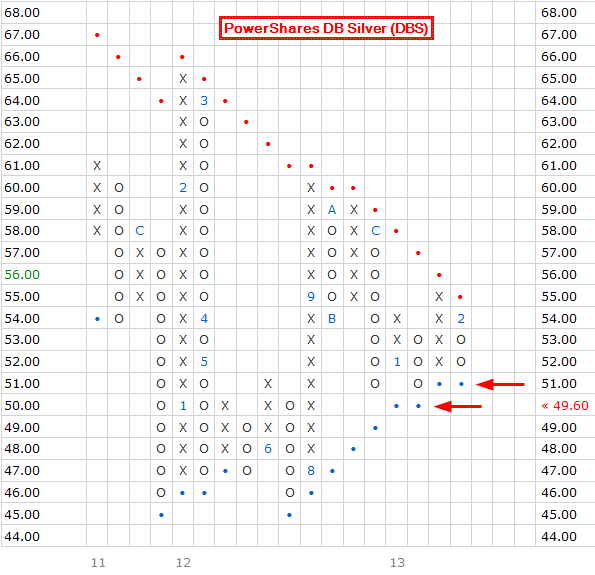 When price finally did fall decisively below bullish support the following month, the portion of the trend line that had been shifted down to account for the second line test was removed and the trend line itself was terminated. 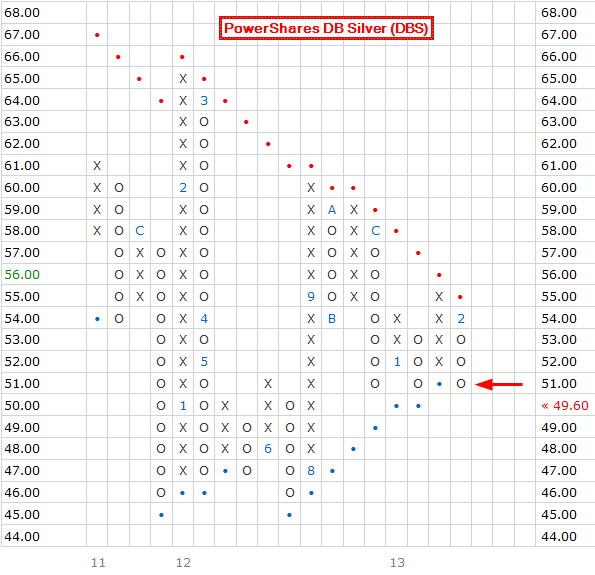 So, contrary to what many P&F newcomers often assume, traditional Point and Figure trend lines are not always drawn in straight lines. In order to visually account for situations in which price touches a trend line without violating it, those lines may be shifted up or down one box, creating new trajectories.

The distinction between a failed trend line test and a successful trend line violation is a critical one. Understanding that distinction will help you avoid false trend line signals and keep you trading on the right side of the trend.